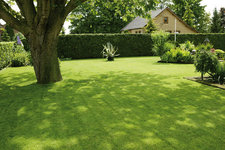 Stress situations which lead to grass diseases (fungi) can occur on sports fields, lawns and golf courses. The changing climate is also a cause of such diseases. Fungi manifest themselves in various ways and can attack the grass cover to a serious degree, reducing playing quality. ‘Prevention is better than cure’ is the message here. However, it is a fact that there are increasingly fewer effective means, chemical or otherwise, for preventing or counteracting disease.

By making use of products containing grass cultivars which score highest on disease resistance, savings can be made on the costs of herbicides and fungicides. Quality is maintained and sustainability is improved.

As part of the Barenbrug propagation programme, selections are made based on genetic cultivar characteristics, such as resistance to red thread, dollar spot and fusarium. New cultivars are being tested for these diseases all over the world. Only the best cultivars are considered for registration in national cultivar catalogues. On registration in cultivar catalogues, these cultivars are tested by independent institutes, such as PPO in the Netherlands, the Bundessortenamt in Germany and STRI in Great Britain, and Bioforsk in Scandinavia. The results can be found in the Dutch Grasgids, the German RegelSaatgutMischungen (RSM) and STRI’s Turf Seed Bulletin and the Scangreen list.

In addition, extended trials take place in order to find the most disease-resistant mixtures using the right combinations of cultivars.

Figure 4 provides an overview of the performance of Barenbrug cultivars in the STRI list compared with the average. On average, Barenbrug’s latest cultivars, red fescues which form fine shoots, demonstrate 30% higher resistance to red thread than the average score on the STRI Turf Seeds 2011. 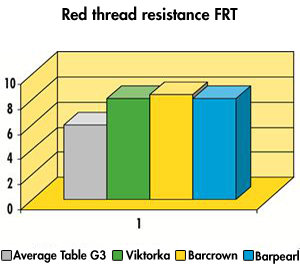 Figure 5 shows red thread resistance for standard chewings fescue (Festuca rubra commutata FRC). On average the score is 5.2, while the latest Barenbrug cultivars score an average of above 8. These new cultivars considerably reduce the chance of red thread infection, even when fertiliser input is low. The disease resistance of the GreenEarth products is 35% higher than that of standard products.

Figure 5: Chart showing resistance to red thread for three Barenbrug cultivars of fine-shoot-forming red fescue (FRC) compared with the average on the STRI list for 2011. 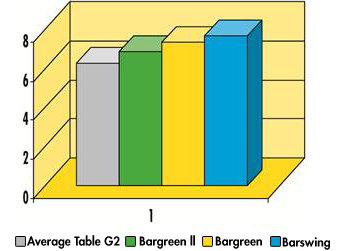 The economically and ecologically sound use and management of grass occupies a prominent position in Barenbrug's product development. Through the introduction of the GreenEarth quality label, Barenbrug is helping green space managers to achieve a more sustainable use and...