A New Tool To Compare Forages

Plant fiber is a complex material that varies greatly in its digestibility. NDF is a forage test that measures the total amount of fiber in a feed. It has been understood for a long
time that NDF is a measure of the “bulky,” slow-to-digest feed component. The higher the NDF value, the less an animal could consume and the lower the forage quality. Some forages, such as cool season grasses, have higher NDF content than alfalfa, and have been considered lower quality as a result. This, it turns out, is an over-simplification. The truth is that NDF values cannot be compared between forage species. Not all NDF is created equal. Optimizing forage utilization by dairy cattle requires knowledge of the NDFd and the rate at which it digests.

Relative Feed Value (RFV) has been widely used to rank forages for pricing, harvesting and allocation of forages to different groups of animals. It was largely influenced by Acid Detergent Fiber (ADF) and NDF values. Relative Forage Quality (RFQ) was developed as an improvement on RFV. The RFQ value incorporates digestible fiber, making it a better indicator of how an animal would perform on a given forage. But a basic limitation of RFQ is that NDF values from alfalfa, corn silage and grasses cannot be directly compared.

The Total Tract Neutral Detergent Fiber Digestibility (TTNDFd) index developed at the University of Wisconsin is a new tool that permits comparisons of fiber analyses from different forages. The TTNDFd provides better predictions of milk production from fiber analysis and shows that NutriFiber forages supply higher energy due to their high fiber digestibility.

This new forage quality assay can also be used in developing new varieties as a selection criteria in breeding programs. The NutriFiber mark is your assurance that your forages have the highest genetic potential of producing the highest TTNDFd ration forage components for your high-producing cows. The graph below shows the variation of digestibility in forages. NutriFiber forages range between 60-80 TTNDFd (% of NDF). Less than 40% TTNDFd represents poor digestion and over 50% TTNDFd represents excellent digestion. 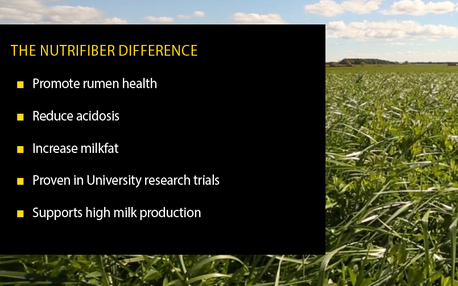