These large, mosquito-like insects can be found in the majority of the Northern United States and can be a catastrophically damaging pest to any turf area. Below are some important cultural practices that you can use to identify, anticipate and mitigate the effects of this pest.

As the year dwindles down, we feast through the holidays, and the European crane fly (Tipula paludosa) larvae begin engorging themselves as well. The European crane fly is a common pest in the northern United States, originating from western Europe. It became a pest in North America in 1952 when it was first introduced to Newfoundland, Canada; then became a prevalent problem when it hit the western shore on British Columbia, Canada. From the west coast of Canada, the European cranefly headed south, invading the majority of the northern United States.

The awkward, mosquito-like adults begin to make their appearance in the late summer, bumbling through the air and clinging onto walls. While the adult’s life stage does not cause the greatest damage to the turf, their emergence from the soil causes castings similar to that of earthworms, and leaves exposed bare soil that welcomes weeds and other pests. Within 24 hours of emerging, the females mate and lay dark, jellybean-like eggs (Picture on left) in the turfgrass, or sometimes off-crop in the nearby habitat where constant moisture can be maintained. Eggs incubate for 11 to 15 days and then hatch into their first of 4 larval instars (Picture on right). The larval stage is where the majority of damage is caused to the turfgrass. These leathery larvae eat away at the crowns and roots of turfgrass. In the spring, when temperatures begin to rise again, the crane fly larvae surface in the damp evenings to feed on the turfgrass blades, while continuing to feed underground in the day. 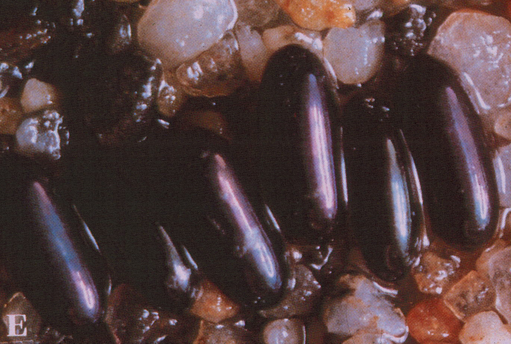 Damage can be seen in the turf stand as the living turfgrass begins to die in patches. Bare soil is exposed as larval feasting continues in the winter and spring, while larvae may be visible from the surface along with their castings (Bottom left). If you are unsure crane fly larvae are the culprits of patchy senescence, take a sod cutting by exposing the top 1-2 inches of soil and grass from a 1 foot by 1 foot area using a shovel, as seen in the picture on the bottom right. If there are more than 25-50 larvae in this sample, populations may be above an acceptable threshold and would require control. 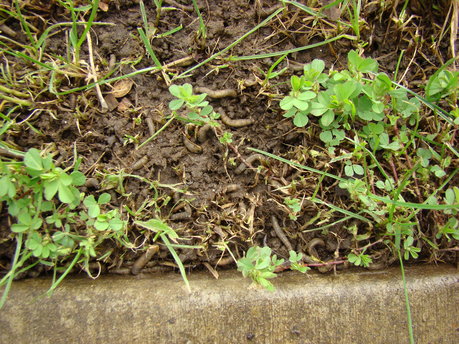 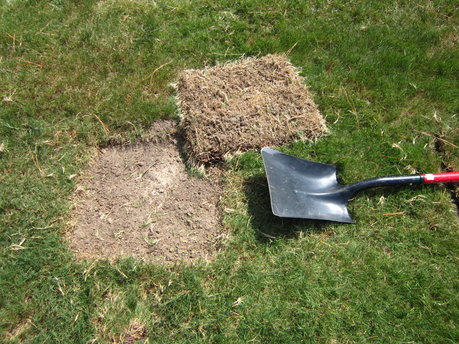 The Pacific Northwest Pest Management Handbook suggests that irrigation should be discontinued around Labor Day to mitigate the larval populations, if fall seeding is not occurring. However, depending on the severity of the historical populations of crane flies, this tactic may not ensure adequate control, and pesticides may be required. Caution should be exercised when applying insecticides, following the label recommendation, optimal population thresholds, and timed application which should not coincide with pollinator activity.